What we do
About Brooklyn

We are ALWAYS available and happy to assist you.
Our tours include bicycles, fun & safe. Subject to weather condition

Join us to try awarded Pintxos.
Selected Pintxos with amazing and unique flavours.

Get in touch!
About Brooklyn

San Sebastián (Donostia) is one of those perfect cities to go out and try some basque pintxos (A pintxo -literally “thorn” or “spike”- written in Basque, is a small snack typically eaten in bars, traditional in northern Spain and especially popular in the Basque country and Navarre).  As you may know, Donostia is renowned for its Basque cuisine. San Sebastián and its surrounding area is home to a high concentration of restaurants boasting Michelin stars including Arzak, Berasategi, Akelarre and Mugaritz, to mention but a few. It is the second city with the most Michelin stars per capita in the world, only behind Kyoto, Japan.

Been said that, why not to sharing our culinary culture, if you ever want to visit this beautiful city? We are up and more than happy to assist you by guiding you through the best pintxos bars, riding a bike during the process! 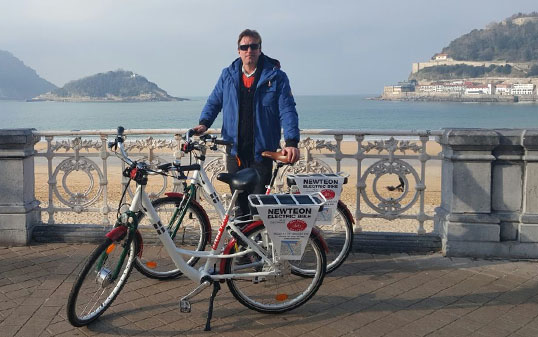 Discover San Sebastián best Pintxos.
The well-kept culinary secret. What you see is not what you think!

Visiting San Sebastián never was so fun!
Riding a bicycle while trying the best pintxos all over the city.

Our Service
Our Work

“I’m really impressed about this culinary tour. It was fun! Trying different and unique flavours, very tasty. Our guide was very kind, he answered all our questions and explained it us everything about Pintxos, and the spectacular city.

Really looking forward to return next year, I will tour with you again. You guys do a great job!”

“I’m very familiar with the Basque culture and its food. Pintxos are a fine way to discover new flavours and the taste is delicious, for almost all of them I have tried so far. I never thought that, by riding a bicycle all over San Sebastian I could be amazed by the difference, between a standard Pintxo (which you can find easily in ‘la parte vieja’, and what this tour offer).

What I am trying to explain is, you can go standard or you can go VIP for almost the same price. Our culinary guide took me to bars I never thought they existed (only locals know) and the assistance and kindness of his service…. The tour was outstanding.”

“The one and only Pintxos tour you can find in San Sebastian. We’ve visited Donostia as a family several times now. Of course, we have tried other tours but none have ever matched our expectations, than PintxosDonostia. Highly recommended.

We simply loved it. My wife and son were speechless, we indeed tried the best Pintxos in town. You guys know very well how to select them! It was awesome! Please keep up the great work!”

Visiting our City Pintxos Bars will fill you with warmth and put you in food heaven.